The Oxford Philharmonic Orchestra has recorded a special concert, featuring a world premiere from composer John Rutter performed by bass-baritone Sir Bryn Terfel, as a thank you and tribute to the work of the Oxford COVID vaccine team.

In recognition of the scientists at the Oxford Vaccine Group and the Jenner Institute, a film of the concert will be streamed on Friday 18 December for members of the public, following an exclusive first viewing for those developing the COVID-19 vaccine.

The concert, recorded at the Sheldonian Theatre, will be introduced by Classic FM’s John Suchet and will feature interviews from performers, researchers, and the Vice-Chancellor of the University of Oxford, Professor Louise Richardson. The tribute will also include special messages from the Orchestra’s Royal Patron, HRH Princess Alexandra, as well as violinists Anne-Sophie Mutter and Maxim Vengerov, both long-time collaborators with the Orchestra.

Sarah Gilbert, Professor of Vaccinology and project leader for the Oxford Vaccine Trial, said: ‘On behalf of the COVID-19 vaccine trial team, I would like to thank the Oxford Philharmonic for this creative approach to celebrating our work, and look forward to the performance which should provide some welcome respite from the difficulties we have all faced this year.’ 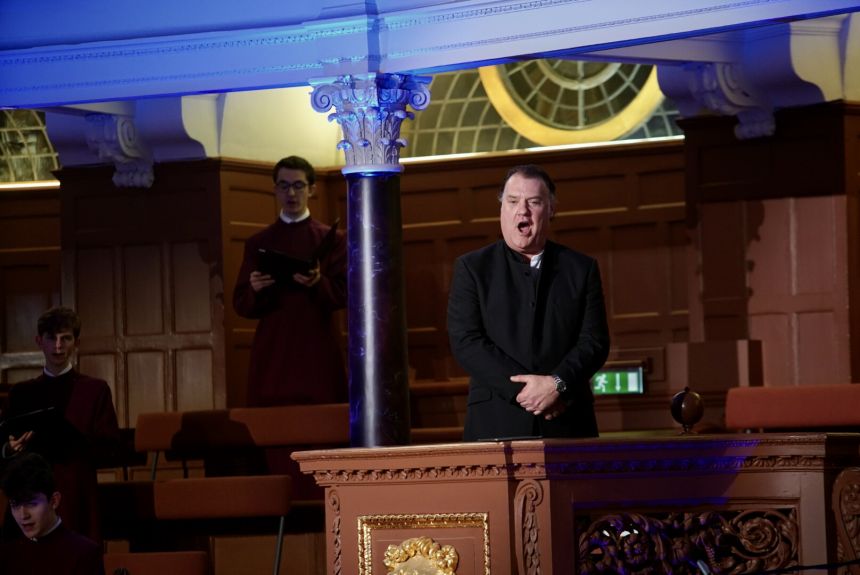 Director of the Oxford Vaccine Group and chief investigator of the Oxford Vaccine Trial, Professor Andrew Pollard, said the event was also an opportunity to thank all the volunteers, adding: ‘We are delighted that the Oxford Philharmonic Orchestra has decided to pay tribute to the remarkable and dedicated team of inspiring individuals, at the University and Hospital, who have worked tirelessly through the pandemic to assess the Oxford vaccine and show that it can protect people from the pandemic virus.

We would also like to dedicate the moment to all those who came forward to take part in the trials during this uncertain time, to help in the assessment of the vaccine

‘We would also like to dedicate the moment to all those who came forward to take part in the trials during this uncertain time, to help in the assessment of the vaccine’.

John Rutter said: ‘I am delighted to have been invited to contribute to this celebration, which expresses in music the gratitude we all feel in our hearts. As always, music goes beyond words.’

Conductor Dr Marios Papadopoulos, MBE, is founder and music director of the Oxford Philharmonic Orchestra. He revealed that the idea first came to him one evening whilst joining millions across the country applauding the work of the NHS.

He said: ‘We are extremely grateful to the researchers, medical staff and volunteers based at the University of Oxford for their tireless work in the search for treatment and a vaccine for COVID-19. We offer this concert in celebration of their recently announced achievements and are thrilled to be joined in our message of thanks by a stellar line-up of classical musicians.

‘We have been planning this for the last three months. It is a huge operation to bring everyone together under one roof to pay tribute to the Oxford vaccine team and to celebrate their tremendous achievement. 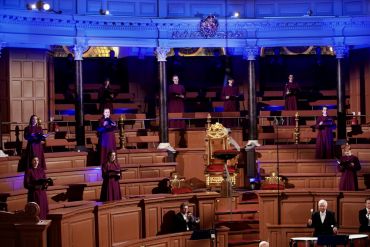 Sir Bryn also joined the Orchestra and the Choir of Merton College. Image by: Nick Rutter

‘While standing outside my home and joining millions in applauding the work of the NHS, it occurred to me that we, as Oxford’s professional orchestra and the Orchestra in Residence at the University of Oxford, might give special thanks to the team in Oxford working on the vaccine.

‘At the time the idea was conceived, all we wanted to do was to express our thanks and solidarity. Little did we know that by the time we came to pay our tribute, we would also be celebrating a life-changing breakthrough.

‘We hope that the tribute will be shared by everyone and serve as a reminder of the scientists’ journey from the moment they set out to discover a vaccine for COVID-19 to the moment they offered us all hope and salvation.’

Filming took place at the Sheldonian Theatre on December 2-3 observing social distancing rules set out by the government.

The concert will be streamed in full on the Oxford Philharmonic’s YouTube Channel on Friday 18 December at 6.30pm. Classic FM will also support the concert by streaming an exclusive programme on their Facebook page, and will broadcast the premiere recording of John Rutter’s new Joseph’s Carol on air, along with Handel’s Hallelujah Chorus.